Shark Wheel won a government grant through the National Science Foundation in January 2018 . The grant was for $225,000 to develop a state-of-the-art wheel for the mechanical irrigation industry. After performing extensive customer discovery interviews and graduating through the government's I-Corps program, Shark Wheel learned what the market desires in a wheel. Shark Wheel not only designed the wheel with incorporating every requested feature, but has had incredible test results to date:

*✅Minimize rutting 14'' for the industry leader vs. 1'' for a Shark Wheel
(the industry's largest issue is digging a trench)
*✅Non-pneumatic tire that can never go flat
*✅Modular design that makes maintenance easier and more cost-effective
*✅Enough traction to traverse clay-based and sand-based soils
*✅Priced within the current industry sweet spot

Shark Wheel built a wheel according to what the customer desires. The test was a success in 2018 and Shark Wheel applied for the Phase II portion of the grant. In Q2, 2019, Shark Wheel won Phase II of the grant for $724,000 to optimize the wheel and bring it to commercialization.

Shark Wheel already has a signed licensing deal with one company in the industry and two LOIs with industry leaders.

Retail prices are over $1,000 per wheel. Agriculture may be Shark Wheel's largest industry moving forward. 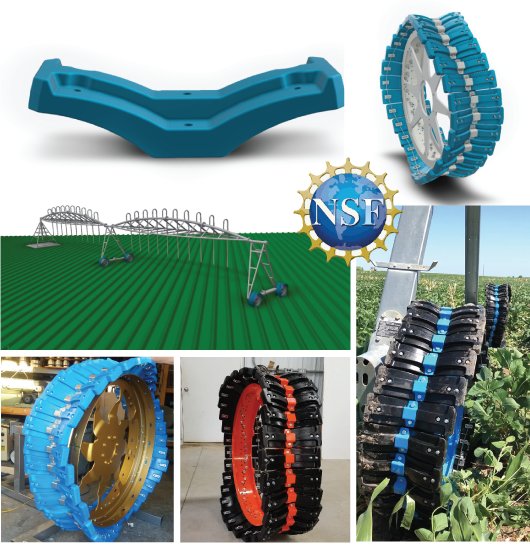 The Shark Wheel is named after the shape of shark jaws and through many iterations, Shark Wheel created another biomimetic design for its tire based on the shape of seagull wings. The flexing non-pneumatic, modular lugs of the tire design approximated the flotation of a pneumatic tire. The sine wave shape of the Shark Wheel was placed in the standard tandem configuration on central pivot irrigation machines and the result was a wheel that did not go over the same track as the wheel in front of it. The front wheel moved left-right-left, while the rear wheel moved right-left-right effectively creating a helix shape in the soil. In contrast to a traditional wheel that continues to move along the same track over and over again digging a rut, the Shark Wheel disrupted the soil in a snake-like shape, while the rear wheel pushed the soil back to where it began. This greatly minimized the industry-wide issue of rutting. Shark Wheel estimates an average farmer can save over $27,000 by switching to a sine wave wheel geometry because of less down time due to flat tires, less rutting and greater crop yield.