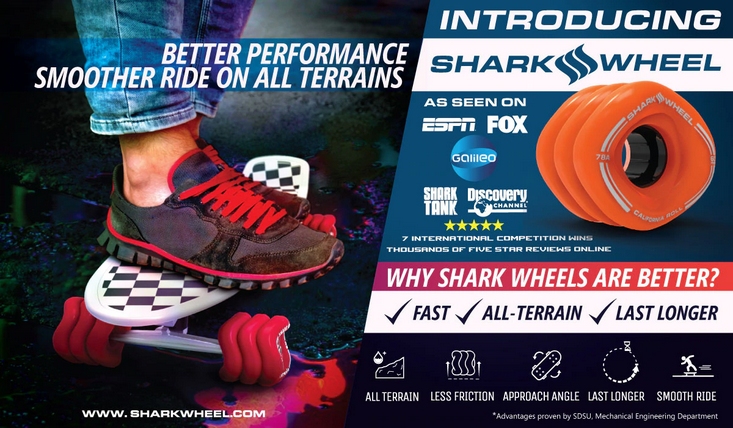 Electric Skateboards are typically used for cruising. Whether you ride to work, school or take a joy ride, electric skateboards are perfect for last-mile transport. Shark Wheel has electrified its sine wave tech and is close to releasing the best-in-class electric skateboard to the world. Testing so far has shown the Shark Electric Skateboard outperforms Boosted Boards. They last longer than and go faster as well.

111mm diameter Shark Wheels are used for Shark's Electric Skateboard. The wheels are large and go over almost anything in the road. They have less friction than a circular 80mm wheel! Get rid of that old electric skateboard and treat yourself to the best board in the industry.

Shark Wheel entered the skateboard/longboard industry in May 2014. Shark Wheel has waited over 5 years to release the best performing electric longboard in the market! 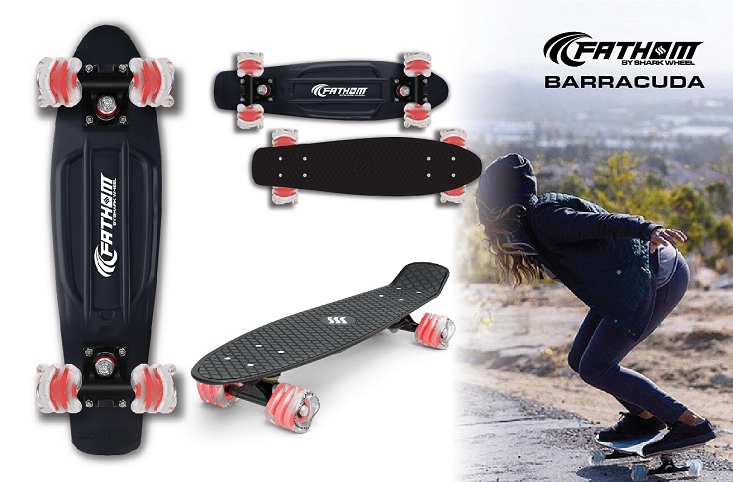 1. Shark's Electric Skateboard is the best in the entire industry. No other board has a non-circular wheel that has been scientifically proven to outperform all competitor's wheels in nearly every single categoy.

2. The best wheel in the world over rough terrain. The sine wave geometry tends to move around small objects like small pebbles & debris kicking them left and right out of the way. Circular wheels tend to steamroll over objects, leading to a performance decline and possibly even an accident. Shark Wheels are perfect for wet roads, as they funnel water away from the contact patch of the wheel adding grip. This has been scientifically proven by SDSU in 2 years of testing.

3. Lasts longer. Scientifically tested to last 15% longer when cruising. Shark Wheel has multiple center points compared to one center point on a traditional wheel. Also, traditional circular wheels prone to flatspotting because they wear unevenly with only one center point. Flatspot resistant. This has been scientifically proven by San Diego State University, Mechanical Engineering Department in 2 years of testing.

4. Lightning fast. Less friction touching the ground, less rolling resistance. Cruisers do not have to work as hard when riding. This has been scientifically proven by San Diego State University, Mechanical Engineering Department in 2 years of testing.

5. Better slide control. The Shark Wheel actually spins as it slides acting like a car's antilock brakes. The 3 lips of the Shark Wheel compared to 1 lip on a traditional wheel give predictable slides. Also, slides are easier to perform due to less surface area in contact with the ground-less friction to initiate slide. Some SurfSkate riders like to drift and the Shark Wheel gives you the ability to break into a slide if you want or just carve with extra grip.